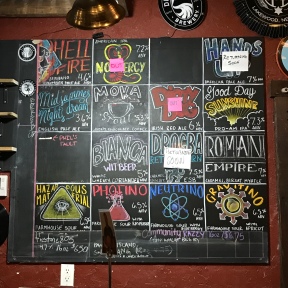 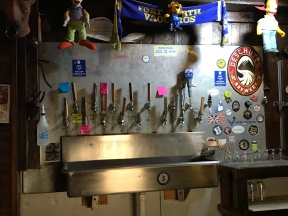 I stopped in at Chimera Brewing Company in  Fort Worth, Texas for a bite to eat and a beer.  The bartender recommended South of the Bruschetta which was fabulous and a modest portion so it was perfect.  I Also enjoyed discussing the  beer s with the bartender who gave me several tastes.  Having tried a  couple of the sours and based on the bartenders recommendation I had a glass of the Neutrino blueberry sour which is delicious.  The blueberry fruit cuts the sour just a bit and adds an ever so slight sweetness to the sour.  It also adds character and complexity.  Delicious.  I noticed the Hell Fire Serrano Pepper Pale Ale and  had to try that.  Hot.  Yes.  Tasty.  Yes.  Can you handle it?  Maybe.  This would definitely be tasty with pizza.  And, the bartender encouraged me to try Roman Empire which we’ll call the gin drinker’s beer.  Nice juniper notes with other herbs as well.  Unique.  So get yourself over to Chimera for pizza and beer.  What are you waiting for?