I stopped in at Vinyl Brewing Company in Hammonton, NJ with industry colleagues.  We each enjoyed a flight and some tasters.  Everything I tasted I enjoyed.  Disrupt the Paradigm Vanilla Porter is delicious (I love vanilla flavor).  We all enjoyed each of the beers we tried. 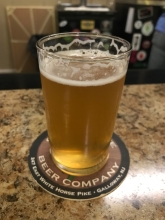 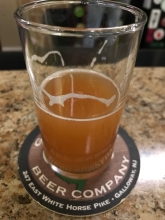 I stopped in at Garden State Beer Company in Galloway, NJ to try their beers.  The fruit inspired options seemed to be calling to me.  The Cranberry Ale and the Blue Jersey American Wheat both had just the right amount of fruit flavor without being overpowering.  Tasty beers.

I stopped in at Green Flash Brewing Company in San Diego, California.  It’s been nearly ten years since I first stopped in here (predating this blog).  It was like visiting an old friend.  Great tap room vibe.  I enjoyed their Soul Style IPA.  Nice and citrusy.  Green Flash is well known for their west coast style IPAs.  I also wanted to try something different so I tried Old Sharemore Wee Heavy and enjoyed that as well.  The caramel and butterscotch really come through.  It is rich and malty.  The food truck out front was a great source for some garlic parmesan fries that I shared with industry colleagues who were with me.  Great stop and great beers. 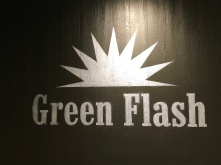 Of all the breweries I’ve visited, the few times when I’ve had a special opportunity to speak with the owners and brewers are the best.  Not only that, on rare occasion when I’m traveling and a brewery opens its doors for me to visit even at times they are closed to the public just further demonstrates why I enjoy craft beer so much.  It’s the people and they way they are bringing together other people, oh and yeah, the beer is nice side benefit.  While in transit to Fort Worth I messaged Rabbit Hole Brewing  in Justin, Texas because they typically only have weekend hours and I was only in town during the week.  They responded and welcomed me to stop by.  When I arrived, the entire ownership/management team spent an hour and a half welcoming me, sharing their story, sharing their beers with me and making me feel right at home.

For a modest sized brewery that’s a pretty good distance from downtown Fort Worth or Dallas they have some awesome beers.  The first one I tried was Rapture Fusion Brown Ale.  Think solid malty brown ale on hop steroids.  Not too hoppy mind you.  Just enough to give it a little kick.  Still malty sweetness and a touch of citrus.  This was a great start.  The next one I tried was 10/6 English Pale Ale.  Part of me wishes I stopped here.  Part of me is glad I tried the rest.  Smooth.  Very Smooth.  Wonderful complex malt character.  Bready but not stuffy.  It’s light but not too light.  English hops keep it from being American hoppy.  I likened it to an ESB.  This would be easy to drink all day long.  And this would pair with just about any food, making it perfect on a restaurant menu.  Next I tried JabberBOCK, their maibock.  German malt and hops distinguish this beer.  And let me say that brewing here is faithful to ingredients from the origin of the style.  I respect that and you should too.  Smooth and delicious for the season coming out of winter and before summer.  Finally, I tried Off With Your Red – Red IPA.  Yes.  Nicely hopped.  It’s red so it has more malt character than most IPAs.  Complex.  Very drinkable and satisfying to the hophead community.

I am hopeful I see the day when Rabbit Hole beers are available outside of Texas.  With the quality of the brew and faithfulness to ingredients I have to believe it’s just a matter of time.  Which reminds me, I’m late, I’m late, for a very important date. 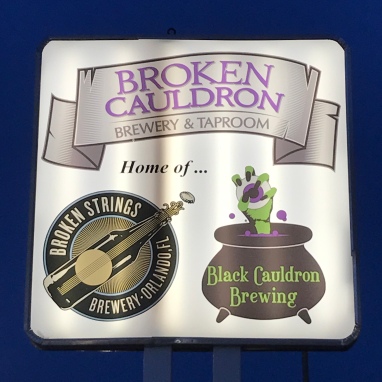 I stopped in at Broken Cauldron Brewery and Taproom in Orlando, Florida last night.  As usual, I was taking pictures for my blog postings.  The owner,  Jeanna, just happened to be out front and was wondering what I was doing with the pictures.  She thought I was with the city government.  Apparently there’s some dispute over her sign (the featured post image).  Personally,  I love the painted sign.  My picture-taking led to a wonderful time talking with Jeanna and her husband about the brewery, their beer and their plans.

I started with Ruckus Red, their signature brew.  What I learned from Jeanna is that their brewery and taproom is the tailgate spot for the Orlando City soccer club.  When there are home games the brewery hosts over 1,000 people.  And, the beer of choice is Ruckus Red, red ale.  I can see why.  I’ve enjoyed red ales before.  This one is special.  Its sweet (malty) and also spicy and bitter.  Its a complex beer and really enjoyable to drink.  Great job! 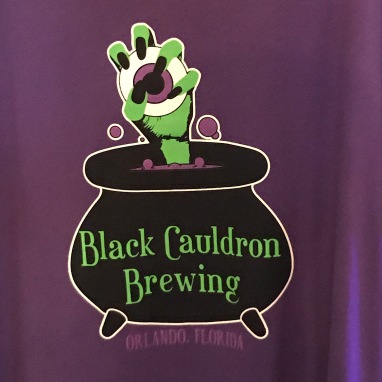 After Ruckus Red I tried the Bleed Purple Blackberry Saison and was really impressed.  This beer packed a delicious tart blackberry flavor into the saison.  Yummy.  I’d drink this often if I were in the area more frequently.  It has both sweet and tart notes.

Jeanna also gave me a tour of the brewery.  I felt like royalty.  And, in the process she shared how they use a Rinnai tankless natural gas hot water system.  Using this system saves them time and money.  With my background in the natural gas business I naturally perked right up when she described how this benefits them.  While in the brewery she told me about the cucumber sour they had which I also tried.  Delicious.  Jeanna wasn’t as pleased with this and I’m sure she’ll be putting finishing touches on this recipe.  With the emphasis on sours these days I find this to be a real contender. 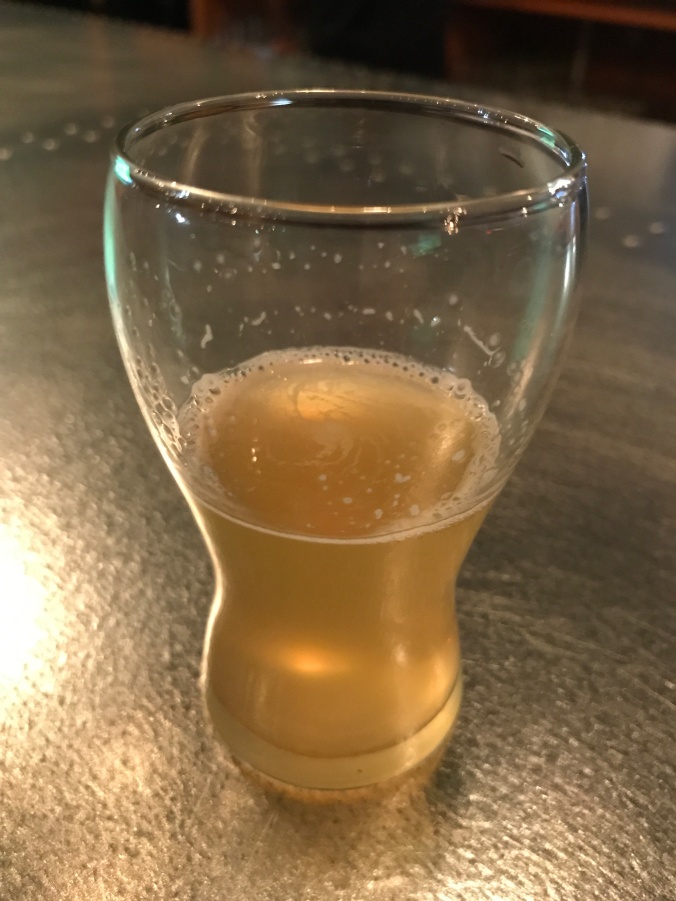 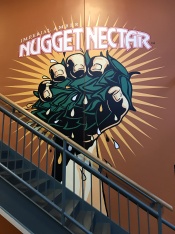 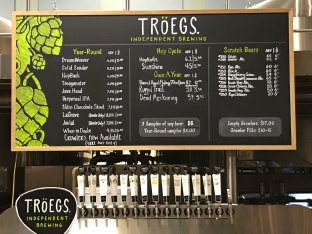 I stopped in at Troegs Independent Brewing in Harrisburg, Pennsylvania attending a work related event.  I was really impressed!  And I had the wonderful opportunity to sample a number of beers in one evening which was a delight.  And, the food they prepared and served for the event was also great.  I especially liked the chicken salad rolls and the java chip cupcakes!.  But, back to the beer.  Troegs HopBack Amber Ale is a great balance between hops and malt.  Drinking this you get some of both and it is really easy to drink.  Troegenator Double Bock is a rich brown caramelly beer that feels perfect for fall weather.  And, JavaHead Stout is a tasty coffee and chocolate tasting stout.  Their Perpetual IPA is a delight to drink.  Not too hoppy yet flavorful enough for most IPA lovers.  Although not as well-versed in Belgian beers, their Jovial is a delicious dubbel, pardon the comparison, but with some of Troegenator and some of JavaHead flavors swirling together.  Although Pilsners are often too “light” for me, their Sunshine Pilsner was tasty and a beer I’d drink again for sure.  The current seasonal, Hop Knife was the only beer I enjoyed a full serving of and it was well worth the full glass.  Not only that, I won a six-pack at the event I was attending and am looking forward to enjoying it with family this weekend.  I also had the opportunity to enjoy to “scratch” beers.  The Mango India Pale Ale was delicious and reminiscent of a Mango IPA I enjoyed in Hawaii earlier this month.  And, if a Harrisburg brewery can make me feel like I’m in Hawaii, that’s awesome.  Finally, I enjoyed the American Style Sour Cherry.  I like sour beers and I really like sour cherry.  This beer reminded me of a similar one at Jolly Pumpkin in Michigan last summer.  I was really tempted to bring a growler of this home with me but with a six-pack of Hop Knife and a fridge full of beer at home I passed on the opportunity.  So, if you’re ever in Harrisburg, PA or even near the area do yourself a favor and stop at Troegs. 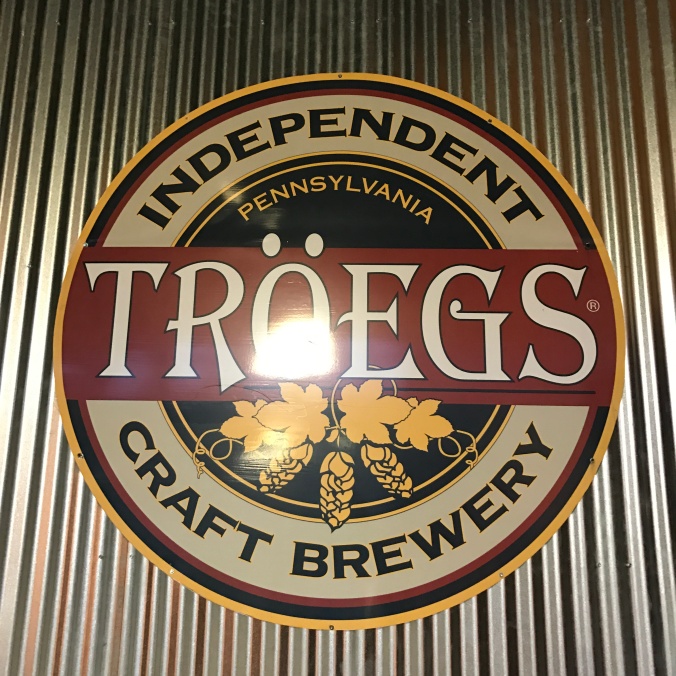 Thanks to the kindness and generosity of Alex of Hardywood Park Craft Brewery in Richmond, Virginia, I stopped in for a tour and tasting outside of normal business hours.  Shout out to Alex!  Thank You!

Alex took me around the entire brewery, told me the whole history and described their current plans. Wow!  He did all that just for me.  We spend well over an hour together.

From humble beginnings, Hardywood has great plans.  I hope to stay in touch and visit again in the future to take part in their success.

In terms of tasting, Alex started me with the Singel which is a delicious Belgian Blonde Ale.  It’s an on-ramp for regular beer drinkers to get them into craft beer.  Well done!  It’s delicious.  From there we went to Pils which is a wonderful German style Pilsner.  Very drinkable and easy to enjoy.  Next I tried the Peach Tripel which I enjoyed so much that I bought a bottle and enjoyed it at home with the family.  Finally, I enjoyed the Bourbon Cru which also rose to he status of bringing a bottle home, but I’m going to age that.  Although I didn’t try it at the brewery, I brought two bottles of Poplar IPA home.  I enjoyed one with the family and it is awesome.  And I shared a bottle with a good friend.

Alex told me about other styles and I could share them with you but I’ll wait until a return  trip and the opportunity to taste them firsthand.

Hardywood is a great place with great people.  Do yourself a favor and stop by!

I stopped in at Swamp Cabbage Brewing Company in Columbia, South Carolina for a beer and got more than I expected.  I absolutely loved the Dunkelweizen.  Although I typically think of this as a heavier fall beer, this example of the style pleasantly surprised me.  It was fresh and flavorful.  I could drink it year-round.  After I was served, the owner offered to give me a tour and graciously shared their entire story with me.  I had a blast.  I wish them the very best.

I stopped in at Busted Sandal Brewing Company in San Antonio, Texas.  The thing is, they weren’t open to the public tonight.  But, that didn’t stop the owner, Mike, from responding to my e-mail and meeting me at the brewery and giving me an entire tour and explanation of their story along with several tastings.  Wow!  What an experience.  Mike is an awesome guy, and if you’re in the San Antonio area you really do need to try these beers.  So here’s some idea of what they have on tap.  The 210 Ale is a deliious and very drinkable blonde ale.  This would go great in the hot weather.  It is smooth and very easy to drink.  The Slippery Rock IPA has got to be one of the most drinkable IPA’s I’ve ever enjoyed.  It has the flavor of an IPA but is not heavy at all and is very easy to drink.  Currently they are experimenting with a Grapefruit 210 Ale which is their flagship blonde ale with grapefruit added.  Personally, I love the grapefruit flavor.  I could drink this all day.  The El Robusto Porter is awesome.  It is rich, chocolatey, and delicious.  This would be a great dessert beer.  So, there you have it.  Get yourself over to Busted Sandal and try one! 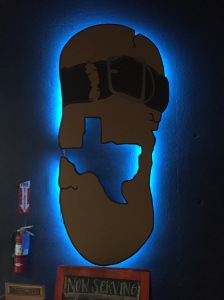 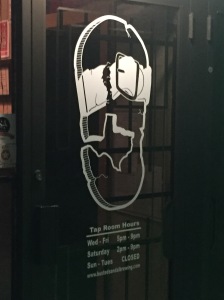