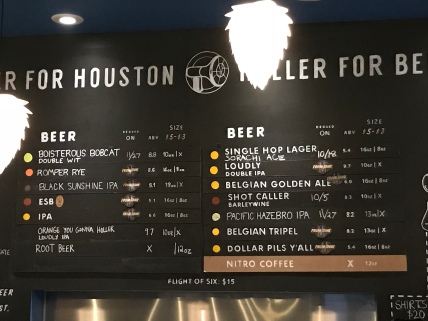 I stopped  in at Holler Brewing Company in Houston, Texas.  They have one of the nicest bartenders I’ve ever interacted with.  She told me all about the brewery, gave me tastes of several beers, and ensured I had a great time.  I enjoyed the taste of their IPA she gave me.  Reminded me of my favorite IPA, Pliny the Elder from Russian River.  I also really enjoyed their ESB.  That’s a favorite style of mine but not many breweries brew it.  Holler’s ESB is very good and well worth trying.  I Holler for Beer at Holler Brewing Company!