I stopped in at the New Belgium Brewing Company in Fort Collins, Colorado for a tour which was a great experience.  We covered the entire process from beginning to end and even were given the chance to slide down the slide in the tasting room (I declined).  In the tasting room we sampled several beers.  Of course, like most folks, I tried the Fat Tire Amber Ale which is the flagship beer for New Belgium.  This beer never disappoints.  I also tried Ranger IPA and Rampart Imperial IPA.  Both of these are great beers and once I had tried them I noticed that they were available back home.  While in the tap room I purchased a bike bell for a co-worker.  The tap room is a cool place where people can gather and enjoy great beer. 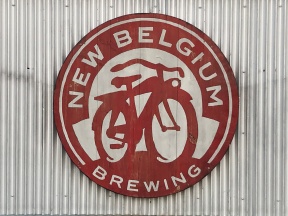 I stopped back in at New Belgium Brewing Company in Fort Collins,  Colorado.  Given the season I just had to try Voodoo Ranger Atomic Pumpkin.  Great spices in this beer.  Delicious and pretty strong.  A very enjoyable beer to warm me up on a cool evening.